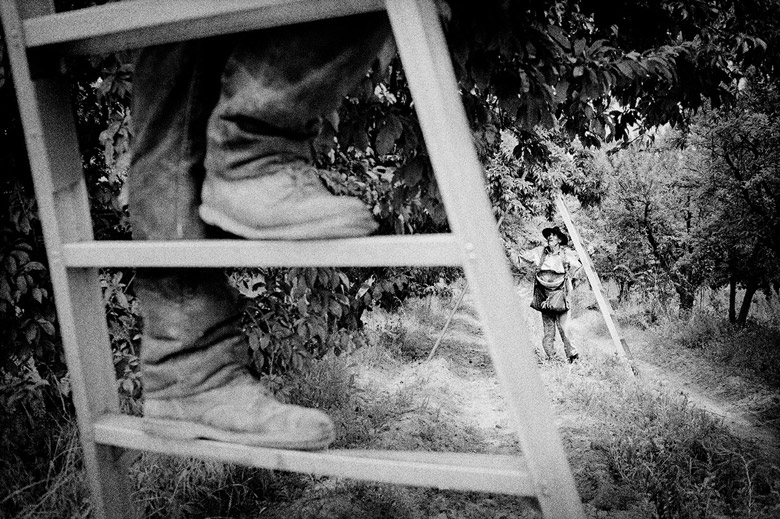 Click here to view Matt Black's exhibit on SDN, The Kingdom of Dust/The People of Clouds.

Matt Black is an American photographer who grew up in California’s Central Valley. His work primarily revolves around documenting food, farming and the human relationship to the land in that area. We talked to him about the work recently exhibited at his first solo show in New York at Anastasia Photo gallery, his ongoing ‘Geography of Poverty’ project on Instagram, and what it means to work on life-long projects.

Caterina Clerici: Let’s start with your recent exhibition at Anastasia Photo gallery in New York, “From Clouds to Dust” which brings together two “twin documentary projects” of yours, ‘The Kingdom of Dust’ and ‘The People of Clouds.’ The first embodies part of your multi-year work chronicling contemporary farming life in California’s Central Valley, while in ‘The People of Clouds’ you document the disappearance of farming culture and the indigenous communities dependent on it in Mixteca, a region in southern Mexico. What’s the link between the two projects?

Matt Black: The work exhibited at Anastasia puts together two different projects, but it’s a continuum to me as a photographer. My professional life started in the Central Valley, then followed the route taken by the immigrant field workers but in reverse, back to their home towns in Mexico, and then took me back here to California. Also, both projects focus on the issues I’ve always been interested in exploring: labor, migration, food, farming. The work is about the human connection to the environment, about the community, and its land.

CC: You graduated from San Francisco University with a degree in Latin American and US labor history. How did the transition to becoming a photographer happen?

MB: I never really wanted to be a “professional photographer”: photography has been a way to engage on these topics, to explore communities and the issues they’re facing. I don’t see photography as an end per se, but as a means of engaging, communicating what you’re trying to say… and you have to know what you’re saying with your photography.

CC: How does the fact that you’re so familiar with the area and the issues you’ve been documenting for decades affect your photography and help in that sense?

MB: There is a strong connection between myself and what I photograph. You have to have that. If I didn’t have that connection, I wouldn’t feel like I had anything particularly interesting to say about a topic. If the issue is something dear to me, like the drought in Central Valley in California in this case, then I know I do have something to say.

CC: What led you to take that leap from California to Mexico?

MB: The issues I’ve been exploring in Mexico are very similar to the ones I’ve been documenting for so long back home. In the mid-1990s, while I was working in California more and more workers were migrating there from Mexico. I started asking myself ‘Why? Why are they coming? What’s forcing them out?’ So in 2000 I went to Mexico to see what was happening there and over time I’ve watched the impact of this migration grow. I saw that the towns were disappearing: no one was left except for the youngest and the oldest. So, ‘Why do people migrate?’ was always the core question behind the project.

CC: What struck you the most when you were working in Mexico?

MB: These towns are dying and it’s just incredibly sad. As a photographer, I think what’s most humbling to me was that the many of people are so happy to see that an outsider understands and cares. It’s easy to think that ‘raising awareness’ has become a naïve idea, but most places I go I’m the only photographer. So that’s what makes me think that doing it is important. Because I know what is going on, I feel responsible to be there.

CC: Back to the Central Valley: how did the “California: Paradise Burning” project you and Ed Kashi did for the New Yorker come about?

MB: Ed contacted me to talk about the situation in the Central Valley and it became clear that we should do something together. I was shooting stills and he did the video. It’s incredible how photos, video and audio can work together… all avenues are being employed to tell the story and that makes it very strong.

CC: You’ve recently decided to include Instagram among the many avenues to pursue your documentary work. Why did you start using it?

MB: I had been interested in the idea of mapping photographs for a while and when I looked at Instagram for the first time – not very long ago actually (laughs) – I saw it had a map built in and thought ‘That’s the coolest thing!’ So, the “Geography of Poverty” project was basically built around that part of the application. You see a picture, you see a community and you see where it’s on the map. It can be very powerful and people connect to the image in a different way. Even people who will never go to these places can instantly place them on a map and that makes them more real.

CC: What do you think is the most significant aspect of your work as a documentary photographer and can Instagram or other innovations in the field make it better?

MB: I think the most important aspect of my work is the long period of engagement with a place and these issues. Then something like a drought happens and it shows how everything can change, how it is all so fragile. With my work I can help focus attention on some of the issues, and Instagram and other new media definitely help. I try to use my voice to keep these places in front of people’s eyes. Especially in California, I know these towns and I care about them and I go because I feel it’s my duty to be there. It’s my job to do it.

Caterina Clerici is SDN’s Special Issue Editor. She is a freelance journalist and photojournalist and recently completed a Columbia Journalism School post-graduate fellowship with La Stampa in Turin, Italy. Her previous projects for SDN have been the special issues on Maternal, Newborn, and Child Health in Africa and Climate Change: Our Uncertain Future.