View from the US
Four SDN Photographers explore themes of racial justice, migration, and #MeToo

Lisa DuBois: The Rise and Fall of Abolition Park

Jade Sacker: Beyond the Line: A family story

David Bacon
US: The Deported

The number of people deported from the US, now living in Mexican border cities, can be counted in the thousands. Some become workers in maquiladoras (duty-free factories) or wash car windows in the street. Others become homeless and sleep in river channels or under bridges. In the US media, people become invisible once they're put across the border.  For over two decades, I've taken photographs to document what happens to them.

Deportees become invisible at a time when it’s hardest for them to survive.  So I’ve taken the camera into the Tijuana River channel to take images of people collecting cans and bottles for recycling, or simply cooking on the concrete bank of the channel.

Deportees have organized to make survival easier, and ultimately to protest the system itself. Border Angels helped migrants take over the Migrant Hotel in Mexicali to give shelter and food to people as they’re deported through the border gate. Twenty years ago Baja California’s human rights prosecutor took me to the Mexicali gate where he met deportees with sandwiches and survey forms. These photographs span those two decades.

David Bacon is a California-based writer and photographer.  He is the author of several books about migration: The Children of NAFTA, Communities Without Borders, Illegal People – How Globalization Creates Migration and Criminalizes Immigrants, and The Right to Stay Home. His latest book is In the Fields of the North / En los Campos del Norte, co-published by the University of California Press (Berkeley) and the Colegio de la Frontera Norte (Tijuana), which documents the lives of farm workers in photographs and narratives. Bacon was a factory worker and union organizer for two decades with the United Farm Workers, the International Ladies Garment Workers and other unions. Today he documents the changing conditions in the workforce, the impact of the global economy, war and migration, and the struggle for human rights. Bacon has been documenting the lives and social movements of migrants, farm workers and communities impacted by globalization through photographs and journalism since 1988.  The photography archive of David Bacon was acquired by the Special Collections Department of the Green Library at Stanford University in 2019.

Lisa DuBois
US: The Rise and Fall of Abolition Park 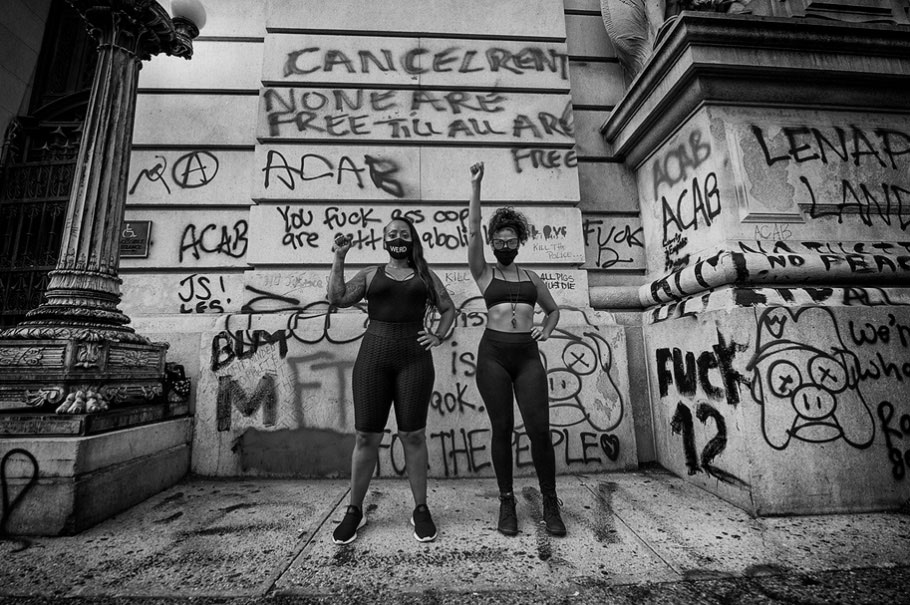 In the summer of 2020, a tent city known as Abolition Park, was established in the autonomous zone near New York City Hall. The park was a place for protestors to bond and organize during one of the most contentious times in American history.

A combination of the pandemic, police brutality, racial inequality and the widening gap between the wealthy and the poor triggered protests throughout the United States. While billionaires traded stocks, people lost jobs and faced eviction.

The public killing of George Floyd might have been ignored if it weren't for so many unemployed people focused on social media. These events triggered a groundswell of paranoia, anger and mistrust of the government. For the first time America's deepest and darkest secrets were exposed. The residents of Abolition Park looked at the Kafkaesque society we created and sought change.

On July 23, 2020, in a pre-dawn raid without warning, police in riot gear ambushed Abolition Park, demolished the tent city and removed the infrastructure along with hopes and dreams of a better world.

Lisa DuBois approaches each photo essay with enthusiasm and an enormous amount of curiosity.  Lisa is a New York-based ethnographic photojournalist and curator. Her work focuses on subcultures within mainstream society. She brings cultural awareness to the public through her photography. Her visual perspective on current events is thought-provoking.  The visual drama that unfolds in Lisa’s photographs reflect cultural diversity.  She captures people expressing their search for a better understanding of the world through their environment, belief systems, and cultural traditions.

Her widely collected work on Black subculture in New Orleans is a demonstration of her deep love for history and tradition. She has exhibited her work both internationally and domestically, including at the Schomburg Cultural Center for Research in Black Culture, and at the Gordon Parks Museum in Fort Kansas. She has been interviewed on BronxNet, Nola TV, and Singleshot about her work.

Lisa received a BFA from the School of Visual Arts and a degree in Metaphysical Science at the University of Metaphysics. As a freelance photographer, she has contributed to several major news publications and stock photo agencies including Getty, Post, and the Daily News. Lisa has been recognized by the Guardian and the New York Times for her work as an artist and curator for X Gallery.  Her most recent project as creative consultant and curator for ArtontheAve helped to launch the first socially distanced outdoor exhibition along Columbus Avenue in New York City . Lisa is a member of Enfoco and a contributor to Social Documentary Network and Edge of Humanity magazine. 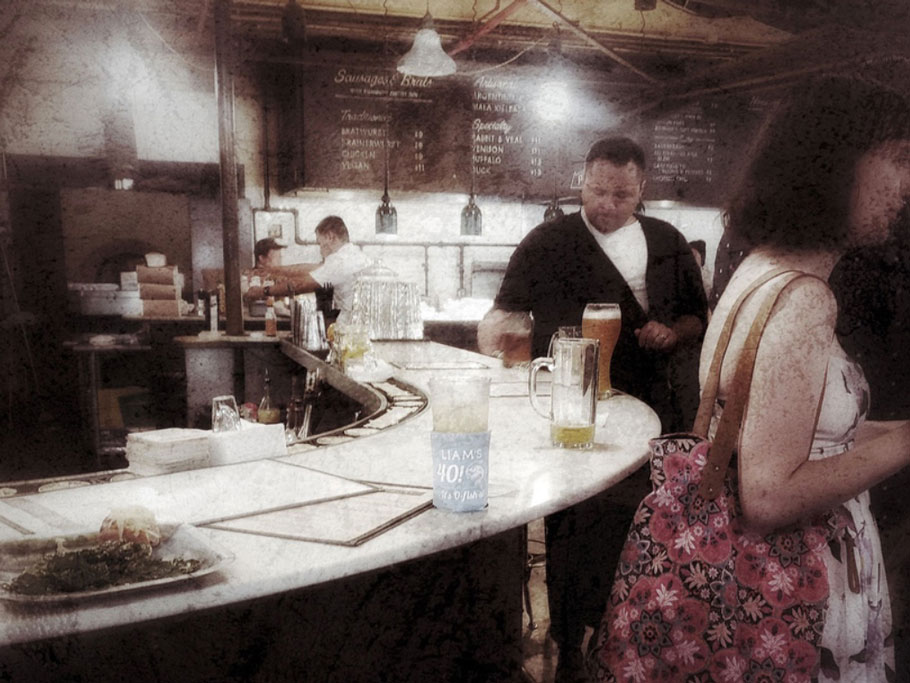 It’s evident that the world men experience is drastically different than that of women. Nothing made this as abundantly clear as the resurgence of the #MeToo movement, the droves of women coming forward to accuse Donald Trump & Harvey Weinstein. It is evident there are actually two worlds—one of unhindered privilege, ambition, opportunity, and freedom—consistently and happily inhabited by men. The other is fear, anxiety, perpetual threats, guardedness, defensiveness, and a horrible and natural existence for women. Yet, men still collectively fail to understand this experience — we live with inherent hindrances that our male counterparts never experience. Going out in public spaces during only certain hours (predominantly daylight), never taking eyes off our beverages when at a bar. We as women constantly prevent and protect ourselves from a perpetual threat we never escape. Those of us who experience this constantly will find this documentation of personal experience all too familiar. Those who have never walked through the world with a female perspective are about to experience a whole new view. I invite you to The Female Experience.

Alyssa Meadows (1989, United States) is a nationally-exhibited artist from Kunkletown, Pennsylvania. She currently resides in New York City, working as an artist and activist worldwide. Driven by self-initiated personal projects and documentary work, she uses photography to break silences, speak truths, educate the misinformed, connect with others, and learn through exploration. Her main subjects predominantly focus on issues of intersectional equality and environmental activism. In 2018, she was selected as a recipient of the Aaron Siskind Foundation’s IPF Grant, as well as best series for NY Curator’s Grief online exhibition, and has recently exhibited at PULSE Art Fair in Miami, FL; AIPAD in New York, NY; and the Satellite Art Show in Brooklyn, NY. She also worked on ForFreedoms’s 50 State Initiative, the largest creative collaboration in U.S. history, documenting artist-created billboards across the country in 2018. She has been published in a variety of publications, ranging from People and Edible Queens magazines to PDN’s Photo of the Day, Capture Mag, Pro Photo Daily, and L’Œil de la Photographie.

Jade Sacker
US: Beyond the Line: A family story

Zoila, an undocumented immigrant from Ecuador, has not seen her son in fifteen years. In her mind, she still imagines him as a four-year-old child.

In the years that have passed since she left him with her mother in her birthplace of Ecuador, she has remarried and given birth to three American children, who have never met their brother.

Together, we created a book for Zoila's eldest son Sebastian in Ecuador, inspired by the family's desire to connect and understand the other's lives. The completed album includes original photography, handwritten messages, archival photos, and pictures her children took with disposable cameras. After the album's completion, I traveled to Ecuador to give the work to Sebastian, and we created a second book to give to his mother, Zoila.

The project is intended to create a portrait of American migrants' identity. To offer an insight into the sacrifices and motivations of those who risk their lives in search of the American dream. In publishing this work, people from all backgrounds can see their children, parents, and values reflected in Zoila's story.

I am a documentary photographer currently based Los Angeles, having graduated from the International Center of Photography.

I come from a Native American family on my mother’s side, now culturally displaced from their land. My father's family descends from Russia, where they fled from the pogroms at the outset of the twentieth century.

My family refused to talk about the past and all that they had lost. As I grew older, I recognized that without understanding and accountability, there is no clear way to move forward, and no sense of resolution.

The unifying theme of my long-term projects is migration, telling stories of those who are displaced, and those whose identity is challenged.

My work is guided by the belief that writing and photography are powerful media to provoke thought and effect enduring positive change. My projects are intended to advocate for a more just and tolerant world.